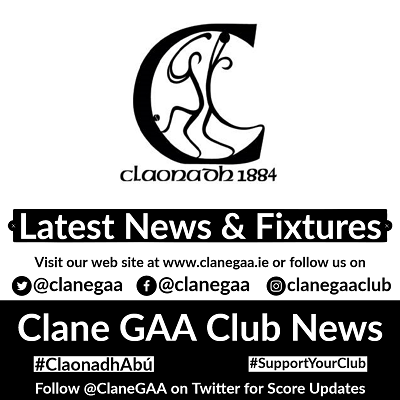 Download our mobile app to hear more about Clane GAA.

This weekend our Minors take centre stage as both our footballers and hurlers have huge matches at the business end of the championship.

Before we look ahead to the weekends fixtures there was one midweek fixture; our very young U13 hurlers played out a thriller of a match against Maynooth in the Division 1 Shield Semi-Final in Maynooth on Wednesday evening. Our lads led by a point at Half-Time and started the 2nd half well before Maynooth had a 10 minute spell when everything they hit seemed to end in a score to take a commanding 9 point lead. It would have been very easy for our lads to simply play out the game but they showed huge character against their much bigger and physical opponents; they rolled up the sleeves, dug deep and whittled away at the 9 point deficit. A few positional changes also helped and with time running out Clane drew level. They even had a couple of long range frees to win it but in the end a draw was a fair result. The replay is tentatively scheduled for Clane next Wednesday evening at 5.30pm. Keep an eye on the fixtures on our web site or ClubZap on your phone. 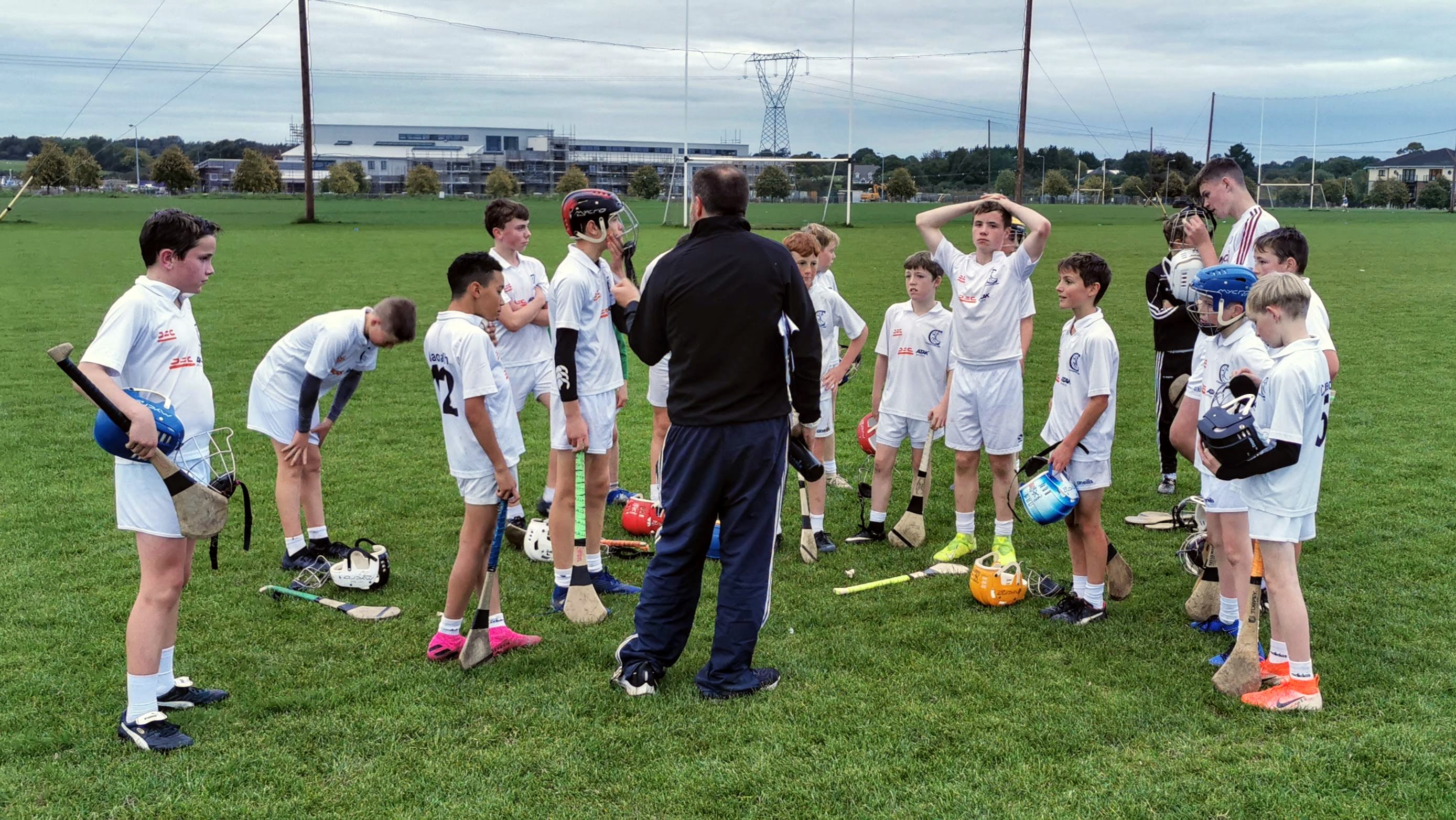 The weekend's action kicks off this evening in Hawkfield.

First up is the Manguard Plus Minor A Football Semi-Final and we wish our team and management the very best of luck as they take on St. Laurences this evening (Friday). Clane faced St. Laurences earlier this year in League Division 1 on March 3rd with Clane emerging with the win by 2-11 to 2-5 but St. Laurences reversed the result in the League Final barely a month later winning by 0-11 to 1-6. St. Laurences are coming off the back of some big wins over Sarsfields, Celbridge and Kilcullen in the championship and will pose a big threat to Clane. The League final loss is Clanes only defeat to date this year and they will no doubt be looking to avenge that loss and secure their place in the final against Naas who recorded an emphatic 7-18 to 0-11 win over Celbridge on Wednesday evenings other semi-final. Throw-in is at 8pm this evening (Friday) in Hawkfield. 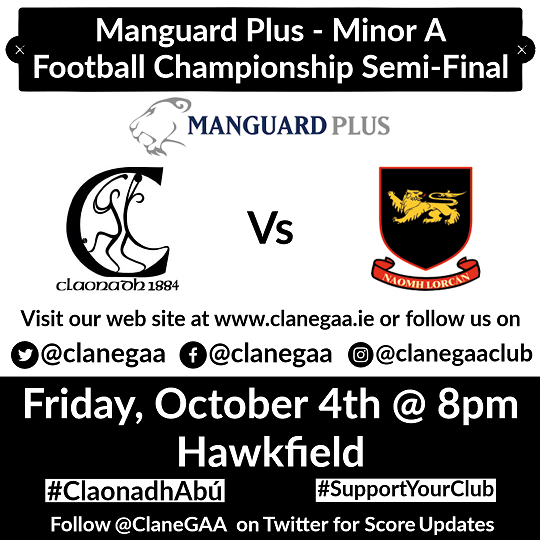 The Clane Óg Academy is back in full swing and takes place each Saturday morning from 10am to 11.15am on the Main Pitch/Hall at Clane GAA. The academy is open to all children aged 4-6 including non-members and the cost is €2 per child. New Ógres are always welcome. Follow #ClaneÓgAcademy on social media or check out our web site for news and updates.

On Sunday it is the turn of our Minor Hurlers who play in the Haven Hire Minor B Championship Final against Moorefield. The team, St. Michaels is an amalgamation with Kilcock and we have 13 players on the panel along with Conall Mooney on the management team and Ronnie Hanks as selector. The teams (ST. Michaels and Moorefield) met in an earlier round of the championship with St. Michaels edging out Moorefield in a thriller with the lead changing hands on multiple occasions throughout the match before St. Michaels finally pulled away at the death by 5-14 to 3-15. The match throws in at 12pm in St. Conleths Park in Newbridge and precedes the Minor A and Senior Championship finals. Best of luck to the team and management. 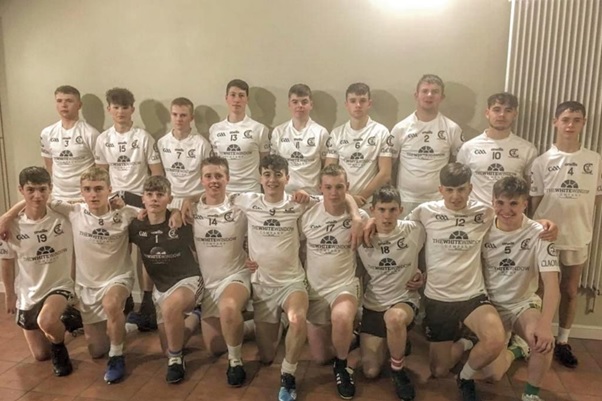 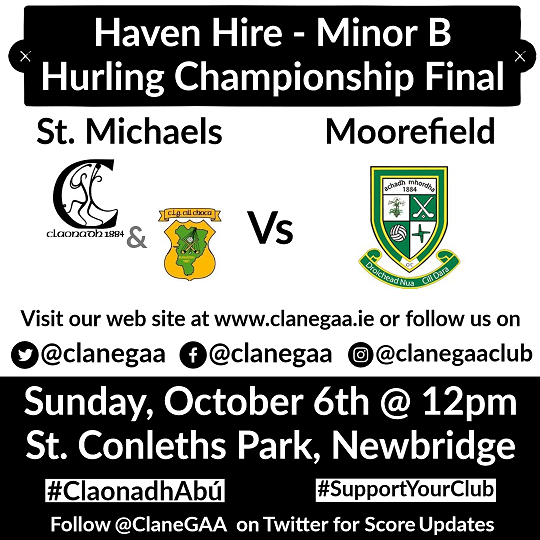 Earlier on Sunday morning our U14 footballers face old foes Newtown Gaels in the A Championship Shield Semi-Final at 10.30am. This is an away fixture and at the time of writing the venue is TBC; please check out the fixtures on our web site or via ClubZap for confirmation of the venue. The teams have played each other twice already this year with Clane emerging victorious in the Féile A Shield Final in May by 6-9 to 3-7 but Newtown Gaels avenged that defeat in an earlier round of the championship in August by 4-9 to 1-6. Best of luck to the team and management.

Later on Sunday afternoon our U12 Footballers will face Naas in the Division 1 semi-final with a 4.30 throw-in in Naas.

Best of luck to all of our teams and their management.

While Ireland are not in action this weekend there are still plenty of games to enjoy from the Rugby World Cup in HD on our Big Screen! On Saturday England play Argentina at 9am while Japan face Samoa at 11.30am. 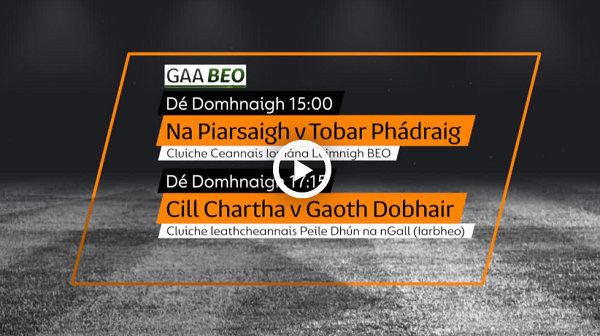 We will also be showing Live GAA action from the club County Championships around the country. On Sunday there is live coverage of the Limerick Senior County Hurling Final between Na Piarsaigh and Patrickswell from the Gaelic Grounds at 3pm with deferred coverage of Cill Charthaigh v Gaoth Dobhair in the Donegal Senior Football Championship semi-final at 5.15pm.

There are also Sunday lunch and dinner specials this weekend including

Duo of Plaice and Smoked Salmon for €12.95
topped with a Hazelnut Hollandaise sauce, steamed vegetables and creamy mash 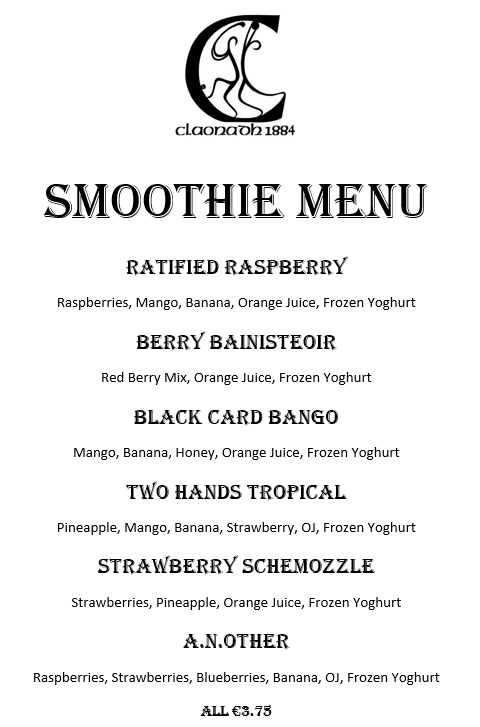 Our staff at the Clubhouse Café & Bar have also launched a new Smoothie Menu! Be sure to give them a try.

Our club lotto jackpot is almost at the €10.000 mark. There was no winner of last week's Lotto Jackpot of €9,600. This weeks jackpot is increased to €9,750. Tickets available at the bar or outside SuperValu on the weekend. The draw takes place every Monday evening and results are published on our social media platforms, follow #ClaneGaaLotto. Many thanks for your continued support. 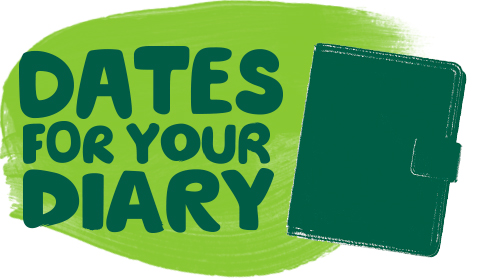 Dates for your diary!

Next Saturday, October 12th there will be a breakfast special offer in our Clubhouse Café & Bar of free tea or coffee refills with every Full Irish Breakfast bought during the Ireland v Samoa match in the Rugby World Cup which kicks off at 11.15am.

We will be hosting the Irish Hospice Foundation - Big Rugby Brunch at Clane GAA to coincide with Ireland's Rugby World Cup Quarter Final which you can watch in HD on our big screen. The match starts at 11.15am and the exact date is still to be confirmed and will depend on which Quarter Final Ireland end up in (Saturday 19th or Sunday 20th of October). Please support! Cost is €10 per Adult and €6 per child and all proceeds go to the Irish Hospice Foundation.

We will also be hosting a Bank Holiday Weekend/Dublin Marathon celebration night on Sunday, October 27th with live music by Turner & Bailer from 9.30pm.

If you haven’t yet done so please download our new mobile app for your phone and keep up to date with all the latest news from Clane GAA.

P.S. To include your news or updates in our weekly news roundup, please send an eMail to our club PRO James Henry at pro.clane.kildare@gaa.ie by noon on Friday.

Calling all Club Members and Supporters!As you may have n...

Our Senior Footballers face Celbridge in the Kildare Coun...

Congratulations to our Senior Hurling team and management...

Applications for Match Tickets are now being accepted.

Given the relaxing of Government restrictions which now p...

Our Senior Footballers play their 3rd Round Championship ...

Clane GAA as part of the Healthy Clubs initiative are sup...

Get live information for Club on the ClubZap App